Pictured is Stitch It International owner Brent McMinn and the Reinagel family, who own and operate Equip Mozambique.

Jon and Carla Reinagel’s higher calling found them a new home in Mozambique. The Reinagels had previously done missionary work from 2008-2011 in the country and felt that “they heard God calling them to return,” according to their website. After settling back in, thoughts turned into what to do next. 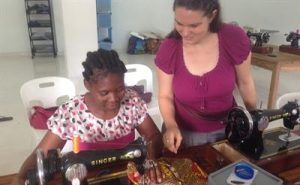 The goal was to open up a school for a place of learning and growth with that organization. With the initiative taking longer than planned, the couple struck out on their own. They started hosting classes for leadership and other work skills in their own living room. The group quickly outgrew their space and they began looking for offices to continue their efforts. In 2014, Equip Mozambique was officially opened.

The non-profit has since launched the Restoring Hope Sewing School, a Christian library called Biblioteca Beireanoa, and a hub that focuses on technology development and initiatives. “We do leadership development through project incubation. We find people that have a vision for their country and have a vision from God. Day-to-day it looks very different. Sometimes it’s leadership development. Sometimes it’s teaching project management. Other times it’s financial principles,” says Jon.

Plans to keep expanding were underway when an unexpected natural disaster struck. Cyclone Idai, one of the worst tropical cyclones ever seen, devastated Mozambique and surrounding countries. The Reinagels and their three children were safe but lost their home to the storm. Miraculously, their training centers and buildings were seemingly untouched. The aftermath of Cyclone Idai saw enormous damage within the country. Communication was virtually non-existent and efforts were delayed, in some ways remain so today. Equip Mozambique decided to act and created the AIDai app within four weeks, which helps distribute information like addressing how to treat health concerns and pinpointing health centers close by. The app is used by other relief organizations, those affected by the storm and friends and family of those affected, with 50,000 downloads and counting.

Alongside the AIDai app are plans to keep growing the Restoring Hope Sewing School. To help overcome damage and loss from the storm, this initiative has become more necessary than ever. The company’s website states the school is a place for “widows and single mothers who struggle to provide for themselves and their families. With their newfound skills, these women are now able to afford food, school materials for their children, home improvements, and medical care. We have [seven] daughter schools operating and empowering women all over our community! We now have a number of partner stores and retailers in the States that sell our schools’ products, but we are always looking for more!”

“We started out with just borrowed machines in the back of the church building. Now we’ve grown to having a large facility with about 20 machines of our own. We’ve probably had at least a hundred ladies come through the school.”

“Cecilia [is] our newest teacher. She has been such a huge asset to the school. Lately, I’ve been pulling her aside, teaching her [different skills], and then she teaches everybody else,” says Carla. With more staff available, the school is currently 70% sustainable on its own with the goal to be 100% sustainable soon. To get there, the institution needs more machines with more capability.

Wanting to expand services alongside sewing, the Reinagels decided to look into adding embroidery work to their line. Stitch It International (Used Machines Division) connected with the company and has donated a used industrial embroidery machine that can handle six garments at once.

“All we [had] were little manual sewing machines. This [donated machine] is going to be massive compared to anything,” Carla says.

Jon adds, “We’ve been looking to get into embroidery for a couple of years. I’ve got a design team, she’s got a sewing department. The embroidery is the happy marriage of the two.”

The donated machine will help speed up this progress and continue to bring in income not just to the women of the school, but to the country of Mozambique as well.

“[In] the sewing [and embroidery] industry, you’re taking a two-dollar piece of fabric and turning it into a $20 item that somebody would buy. So you’ve just added $18 to your economy by your work,” says Jon.

“It’s been really exciting to watch as [students] go through the skills training. We also have Bible study. We affirm them as human beings, and say, “Hey, you matter, you are worth something.” By the time they graduate, they’ve been in our program for about a year. The things that they have made as they’re learning, we then sell, and then the profits go back to them. They can save up to buy their own sewing machines. So they get to graduate with the skills and the tools to start their own business. It’s been really encouraging. Not only are they now able to put food on the table and fix their houses, but just their entire demeanor has changed. They become hopeful and they have dreams again. They have plans for their future, which is something that never would have been possible for them before,” Carla says.

“[This has all] been an adventure. We’ve taken a lot of risks to get here but it’s been worth it,” says Jon.